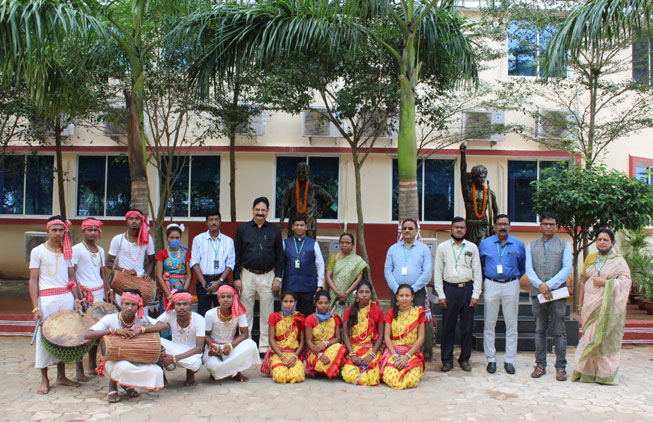 The Laxman Naik Research Chair celebrated the birth anniversary of freedom fighter Saheed Laxman Naik on 22nd November 2021 in a blended mode. Professor Mary G. Bage, former Professor of Sociology, Utkal University was invited as the Chief Speaker, and Dr. Kanhu Charan Mahali, Director General, KISS-DU was the Chief Guest on the occasion. The celebration was graced by members of the Tribal Advisory Council (TAC), faculty members and research scholars of KISS-DU.

Speaking on the occasion, Professor Deepak Kumar Behera, Vice-Chancellor, KISS-DU talked about the contributions of Saheed Laxman Naik towards the Adivasi community. Drawing reference from History, Professor Behera focused on the pivotal role played by freedom fighter Laxman Naik in the Satyagraha Movement and Congress National Movement. He also highlighted the hardships, challenges and struggles faced by Laxman Naik during his freedom movement. Professor Behera added that the Tribal Advisory Council (TAC) and the Professors of Practice have been constantly giving suggestions to promote and strengthen the tribal ethos of the University. He concluded his speech by suggesting the students should emulate tribal heroes and see them as their role models.

Remembering the achievements of the freedom fighter, Professor Mary G. Bage spoke about the life of the great tribal hero and his role in the National Movement during British rule. She added that Laxman Naik belonged to the Bhuyan tribe and in the year 1943, this brave tribal hero led the tribal movement against the Britishers in undivided Koraput district. She also mentioned that during British rule the local administration worked for the Britishers, and the tribals were ill-treated by the revenue officials, foresters and other government authorities (including the police). They were subjected to utmost torture by the Britishers. In order to protect the rights of the tribals, Laxman Naik, who had already become a follower of Mahatma Gandhi, launched his anti-colonial movement. It was under his leadership that the Congress National Movement reached Koraput. He also fought for the rights of the tribals and finally incurred the wrath of the colonial government to be sentenced death penalty. Addressing the research scholars, Professor Bage cited her own example and struggle as a tribal person, and advised the academics and scholars to engage in research activities by publishing articles in the peer-reviewed and UGC Care journals in order to enhance employability. She also advised the students to prepare for the UGC NET examinations.

Dr. Kanhu Charan Mahali highlighted the role played by Laxman Naik as a tribal civil rights activist in the southern part of Odisha. He also spoke about this folk-hero as a cult figure among the tribals. He threw light on the early life and family background of this illustrious freedom fighter. Dr. Mahali impressed upon the students the great opportunities KISS is providing to them for their intellectual and economic empowerment. He advised the students to make the most of the opportunities of education and urged them to contribute to nation-building process and be independent-minded to participate in the decision-making process. He expressed his gratitude to Dr. Achyuta Samanta, Founder, KISS & KIIT, for instituting Bhagwan Birsa Munda and Saheed Laxman Naik Research Chairs at KISS-DU. He also mentioned about the coaching programme being offered at KISS-DU that grooms and trains the students for OAS, NEET, NET, JEE, Railways, Banking and Defence examinations.

In his welcome address, Dr. Prashanta Kumar Routray, Registrar, KISS-DU spoke about the relevance of instituting a research chair in the name of Saheed Laxman Naik, in addition to the existing five Research Chairs in KISS-DU. He said that the prime objective of setting up the Chair is to create a scholarly space for studies and research by intellectuals and, academicians, scholars and students for a proper valuation of the role of Laxman Naik in his anti-colonial movement against the British and his nationalist ideology, thoughts and mission. Speaking in the context of KISS-DU, he said that the University is giving prominence to the much deserved philosophy, beliefs and the contributions of Laxman Naik to the society.

The research scholars of KISS-DU also shared their thoughts about their academic life on the occasion. Dr. Birendra Suna, Director, Research proposed a Vote of Thanks to the guests, members of the Tribal Advisory Council, faculty members, research scholars, students and the organizing team.