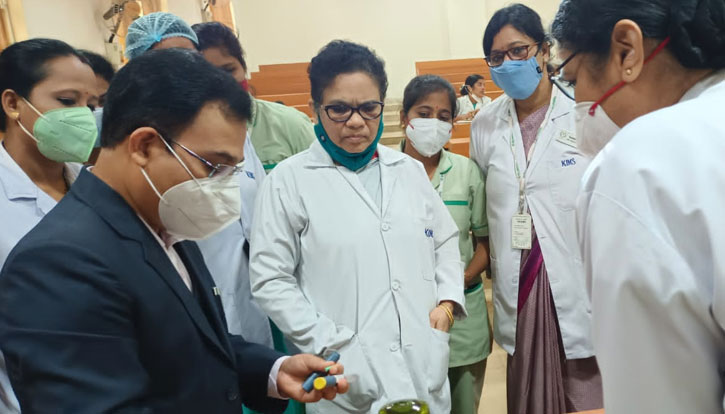 This 415 million is expected to increase to 642 million by 2040. The diabetic scenario in India is grim. One in 6 people with diabetes in the world is from India. The primary global awareness campaign focusing on Diabetes Mellitus is held on 14th November every year as “World Diabetes Day” which is the birth date of Frederick Banting who along with Charles Best and John James Rickard Macleod discovered Insulin in 1922.

The theme of this year’s observance is ‘If Not Now, When?’. It has been 100 years since the discovery of Insulin and it is still not accessible to all patients. It is necessary to make insulin accessible to all the patients who are in need of it.

On the eve of World Diabetes Day, the Department of Endocrinology, KIMS conducted a Nurses Awareness Programme where the nursing staff were made aware of Diabetes Mellitus, its treatment and its complications. Besides, a presentation and demonstration of insulin injection was given by Dr. Dayanidhi Meher, Professor, Endocrinology to throw light on blood sugar management for indoor patients. Free capillary blood glucose testings were carried out with a participation of around 200 people and those with high blood sugars were advised for further investigations and management in the Endocrine OPD. Also a spot urine micro albumin test was carried out in all patients with Diabetes Mellitus attending Endocrine OPD to look for kidney involvement (nephropathy). Lastly, a BMI with the visceral body fat measurement was done in the entire patient attending Endocrine OPD to make people aware of obesity and other metabolic disorders which are major causes of Diabetes Mellitus.

The day was concluded with a positive note of making people keen to learn about Diabetes Mellitus and with a hope of curbing the diabetic incidence and its complications for a healthy world.